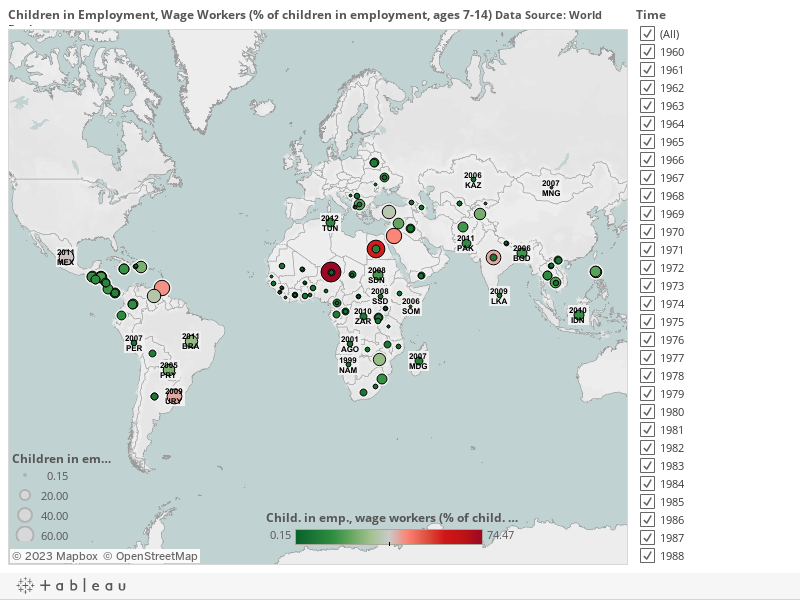 “…Wage workers (also known as employees) are people who hold explicit (written or oral) or implicit employment contracts that provide basic remuneration that does not depend directly on the revenue of the unit for which they work.

Data are from household surveys by the International Labor Organization (ILO), the United Nations Children’s Fund (UNICEF), the World Bank, and national statistical offices. The surveys yield data on education, employment, health, expenditure, and consumption indicators related to children’s work. Household survey data generally include information on work type – for example, whether a child is working for payment in cash or in kind or is involved in unpaid work, working for someone who is not a member of the household, or involved in any type of family work (on the farm or in a business). Although efforts are made to harmonize the definition of employment and the questions on employment in survey questionnaires, significant differences remain in the survey instruments that collect data on children in employment and in the sampling design underlying the surveys. Differences exist not only across different household surveys in the same country but also across the same type of survey carried out in different countries, so estimates of working children are not fully comparable across countries.

In line with the definition of economic activity adopted by the 13th International Conference of Labour Statisticians, the threshold set by the 1993 UN System of National Accounts for classifying a person as employed is to have been engaged at least one hour in any activity relating to the production of goods and services during the reference period. Children seeking work are thus excluded. Economic activity covers all market production and certain nonmarket production, including production of goods for own use. It excludes unpaid household services (commonly called “”household chores””) – that is, the production of domestic and personal services by household members for a household’s own consumption. Country surveys define the ages for child labor as 5-17. The data here have been recalculated to present statistics for children ages 7-14…” (Source: World Bank, Understanding Children’s Work project based on data from ILO, UNICEF and the World Bank)