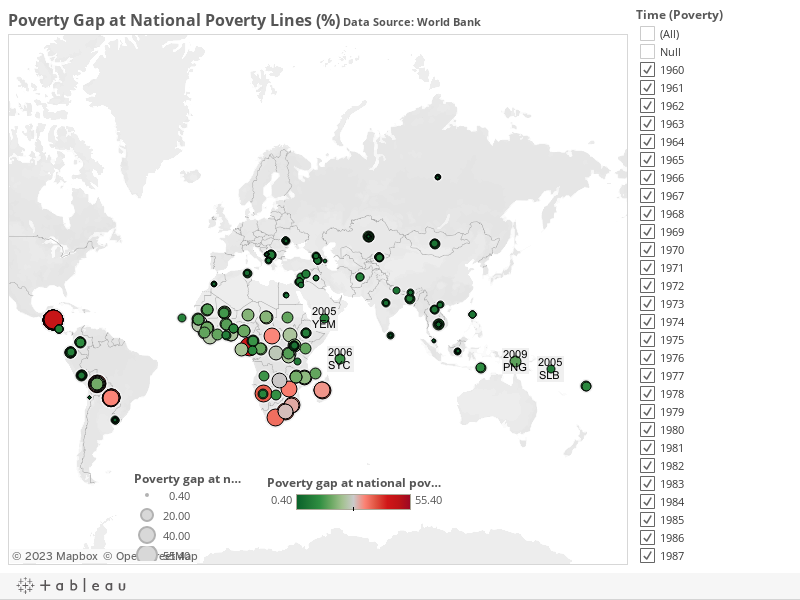 “…Poverty gap at national poverty lines is the mean shortfall from the poverty lines (counting the nonpoor as having zero shortfall) as a percentage of the poverty lines. This measure reflects the depth of poverty as well as its incidence. This series only includes estimates that to the best of our knowledge are reasonably comparable over time for a country. Due to differences in estimation methodologies and poverty lines, estimates should not be compared across countries.

Poverty estimates at national poverty lines are computed from household survey data collected from nationally representative samples of households. These data must contain sufficiently detailed information to compute a comprehensive estimate of total household income or consumption (including consumption or income from own production), from which it is possible to construct a correctly weighted distribution of per capita consumption or income.

Almost all national poverty lines are anchored to the cost of a food bundle – based on the prevailing national diet of the poor – that provides adequate nutrition for good health and normal activity, plus an allowance for nonfood spending. National poverty lines must be adjusted for inflation between survey years to remain constant in real terms and thus allow for meaningful comparisons of poverty over time. Because diets and consumption baskets change over time, countries periodically recalculate the poverty line based on new survey data. In such cases the new poverty lines should be deflated to obtain comparable poverty estimates from earlier years. The data is based on the two most recent years for which survey data are available.